dexFreight Is Recognized as a Top Innovative Freight Tech Company

deFreight is honored with the 2022 FreightTech100 award.

dexFreight has embarked on a journey to build an AI-powered collaborative system to automate logistics workflow.

In this blog post, we argue that automated trucks (especially Levels 4 and 5) will be embedded with digital wallets connected with smart contracts to interact with blockchain to:

We are raising our Seed B round through crowdfunding, here’s why

We have decided to take advantage of the Reg CF rules to enable non-accredited investors, including truckers, dispatchers, supply chain professionals, technology enthusiasts, etc. to have ownership of dexFreight.

As we close this first quarter of the year, we are enthusiastic about dexFreight's growth and progress regarding adoption, community engagement, and new technological developments.

2020 was an unprecedented year for everyone; yet, as it comes to an end, our team at dexFreight wanted to take a look back and share our progress and highlights throughout the year.

Check out what's happening at dexFreight.

Drivers Can Find Parking with dexFreight and TruckPark Partnership 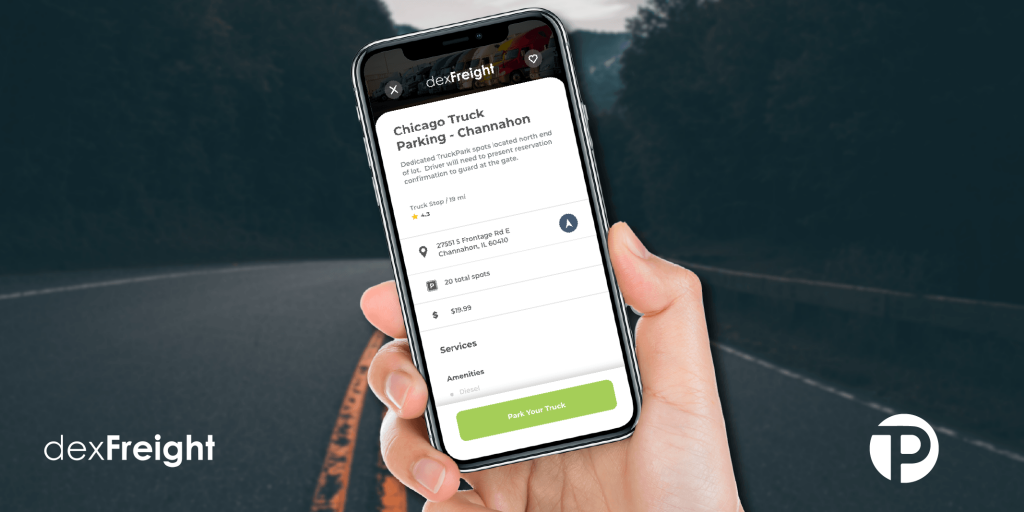 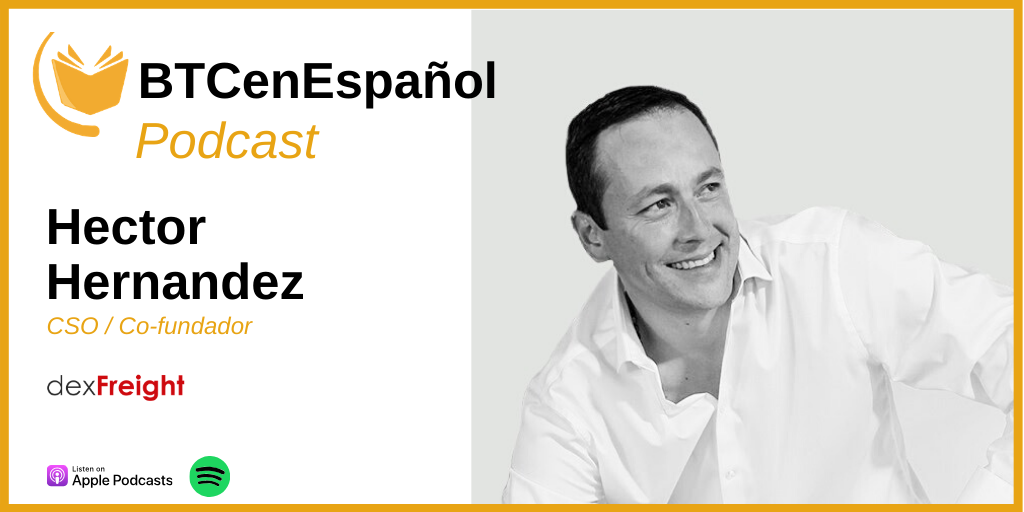 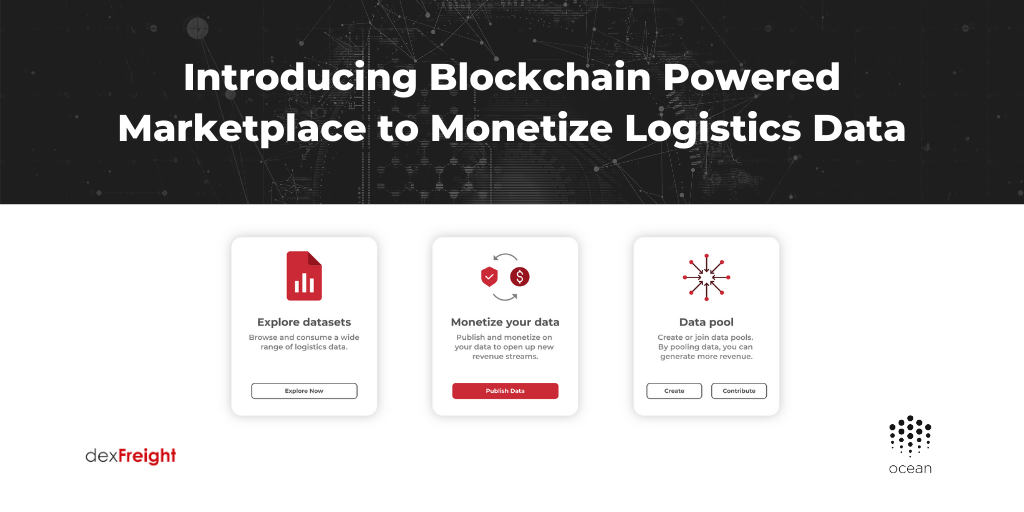 dexFreight and Ocean Protocol are building the first Web3 marketplace for logistics industry to unlock and monetize data. 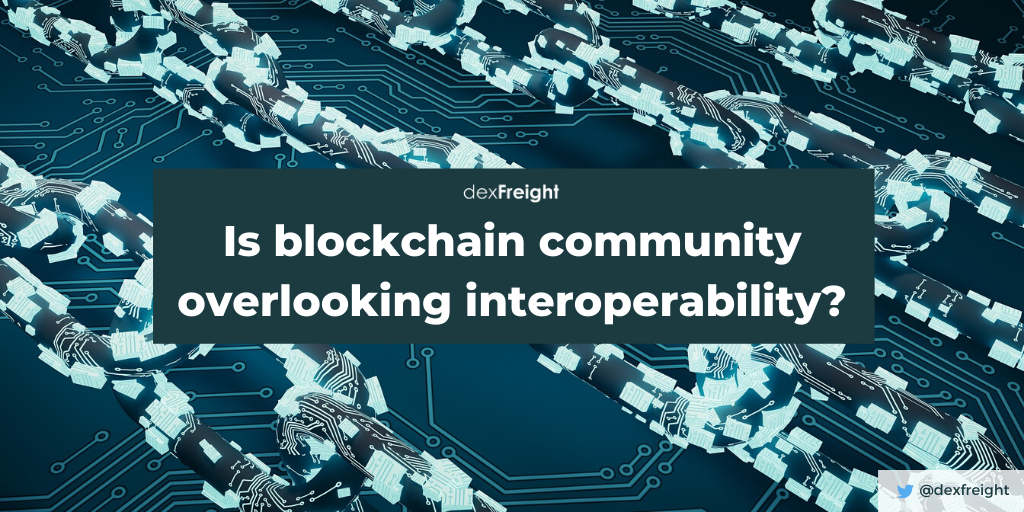 In this blog, we explain why interoperability is critical in the logistics industry for the widespread adoption of blockchain. 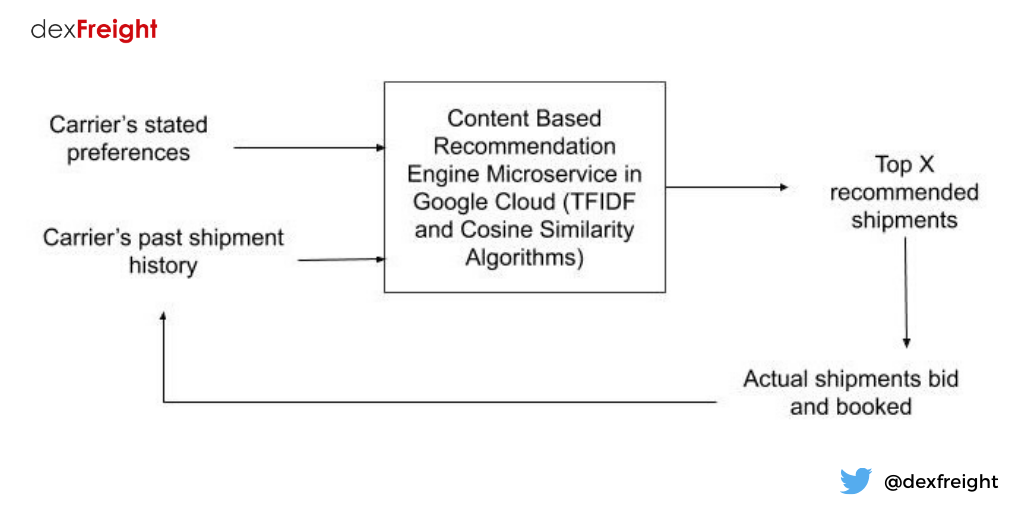 This past month would not have been the same without the extraordinary efforts from our Co-founders, Executives, Employees, and Advisors.

dexFreight is selected to participate in the 500 Startups Growth Program

dexFreight is proud to announce that it has been selected as 1 of the 9 companies from 225 applicants to participate in the 500 Startups Growth Program in Miami. 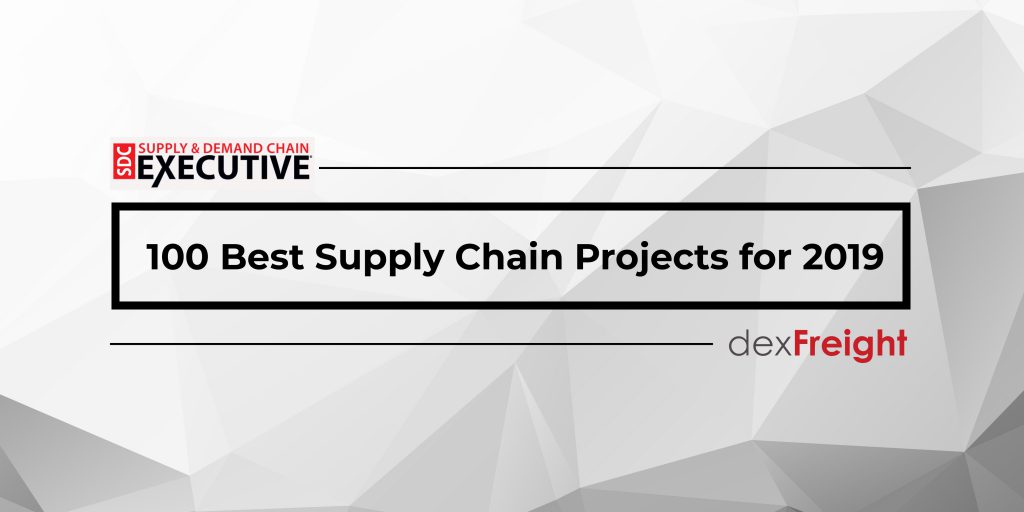 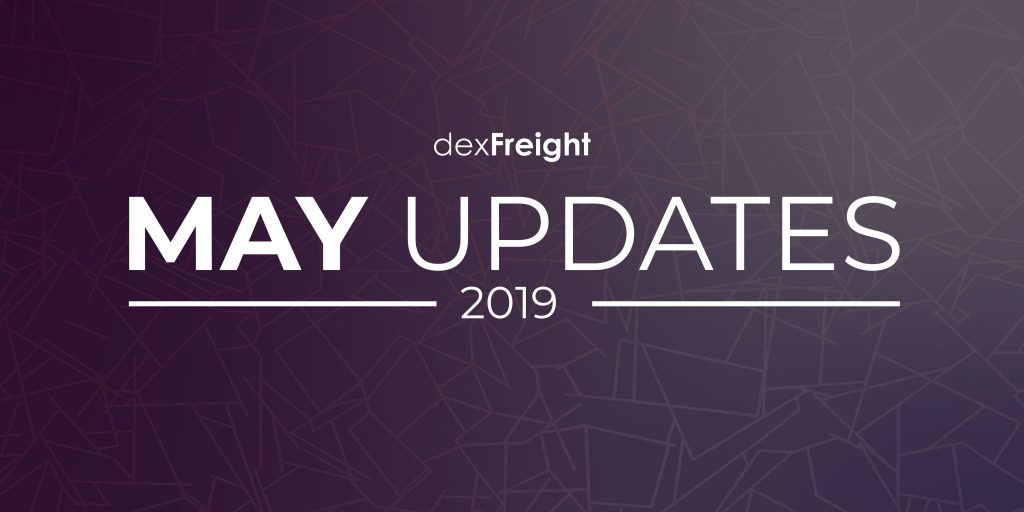 May 2019 represented an engaging and dynamic month for our company.

April was an exceptional month for dexFreight. We are continuously advancing in the development of our platform, and getting closer to a launch date. 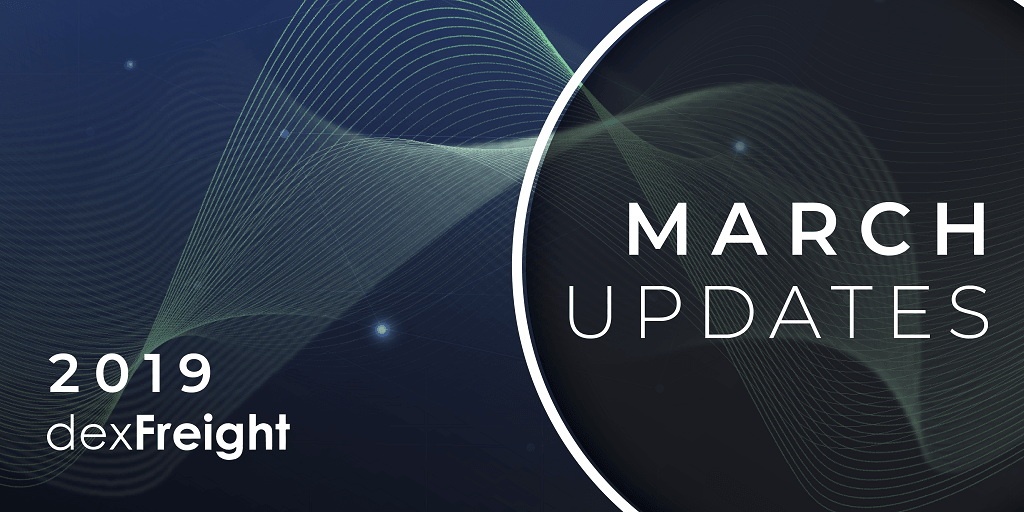 Our dexFreight family keeps growing, and our mission is getting stronger.

dexFreight and CargoX Partner to Transform the Supply Chain with Blockchain 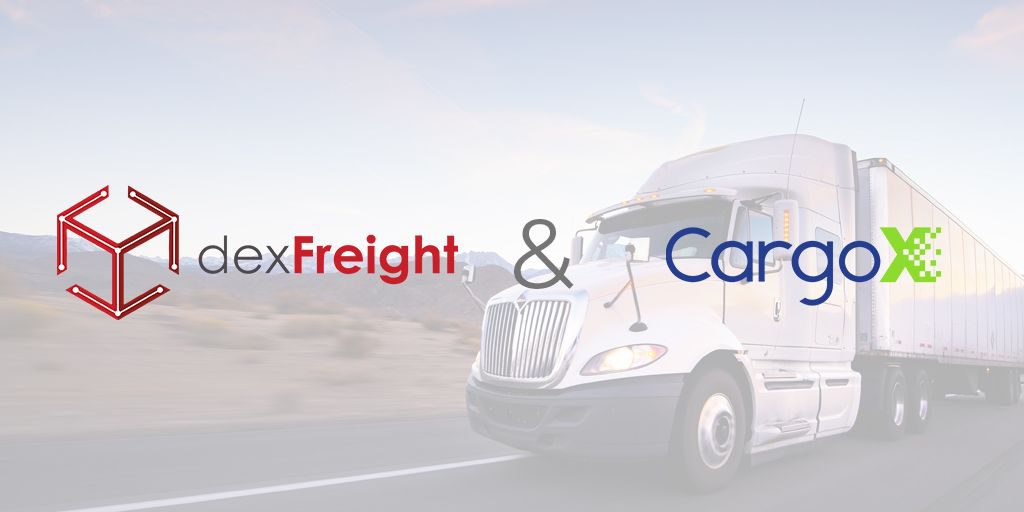 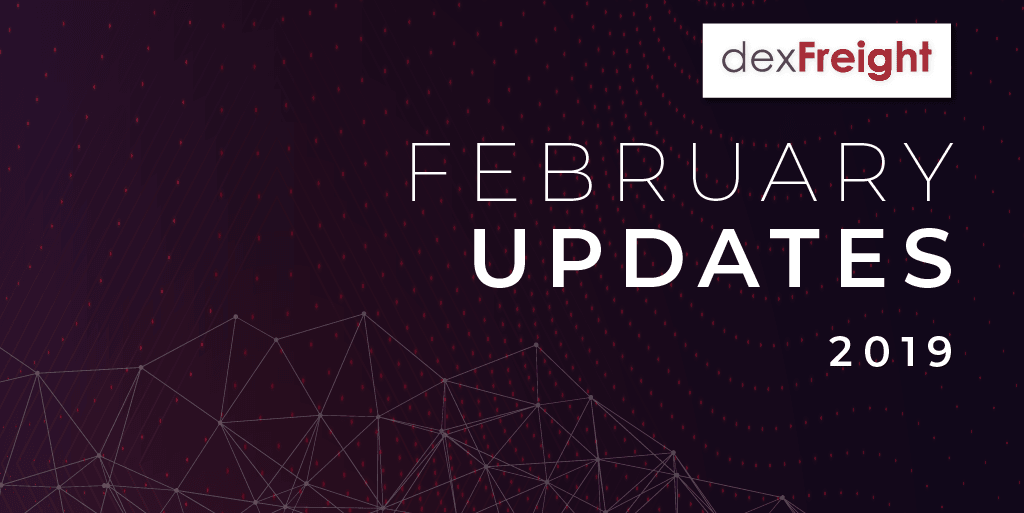 Dear dexFreight community, this 2019 will be a crucial year for our company as we strive to shape the future of global logistics!

What does blockchain mean for Third-Party Logistics (3PL) providers? 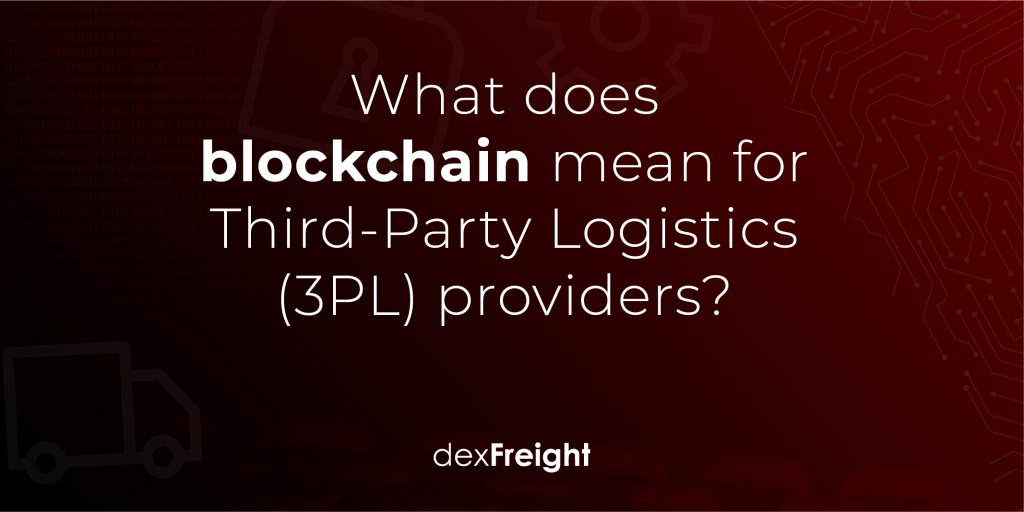 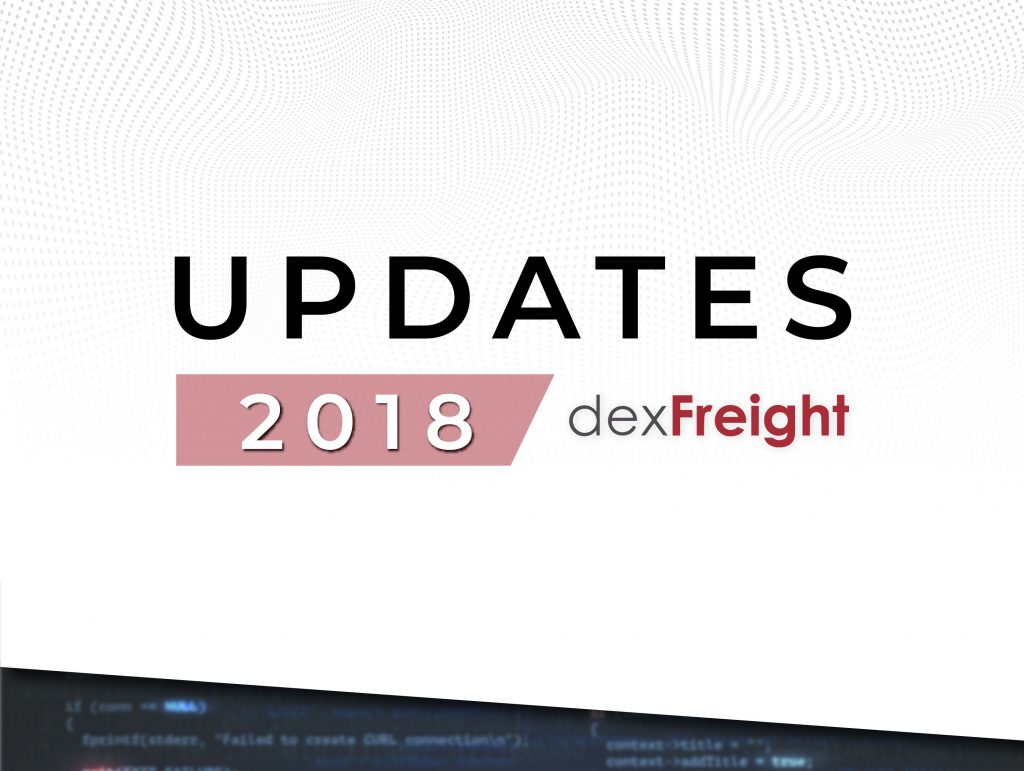 We want to thank you for your support throughout 2018. This past year was an exciting and challenging one for dexFreight, and it would not have been the same without your trust and encouragement. Our company progressed drastically.

Blockchain: A technological makeover for the logistics industry

Of all the industries in the world today, logistics is the largest. In the United States alone, it constitutes over 8% of annual GDP, and as demand for goods from distant lands continues to grow, so does the industry itself. By 2023 it is forecasted to reach over $15.5 trillion globally.

But with growth comes pain. This slice of the global economy is riddled with problems. The multiplicity of stakeholders that do not necessarily know or trust each other has led to over-reliance on non-value-added intermediaries, creating data silos that cripple the possibility of achieving higher levels of efficiency.

The traditional way of doing business just isn’t enough for this increasingly complex web of activities. But blockchain has the potential to overcome this. The integration of blockchain technology into the supply chain is expected to align incentives and speed up efficiency from all angles. Companies like dexFreight are unleashing this technology to the benefit of shippers, carriers, 3pls and receivers on every corner of the globe.

Blockchain is a digital ledger in which transactions are recorded chronologically and publicly. Yet this simple definition barely scratches the surface of its multi-dimensionality, which we’ll delve into later.

First and foremost, there is the Blockchain, which works like a freight train. As it moves swiftly along the tracks it is openly visible to external spectators, letting them know that a general transaction has taken place.

Unlike the logistical processes widely used today, which continue to rely on email, fax machines and paper, transactions on the dexFreight platform are digitized by the use of smart contracts. A smart contract is a computer protocol intended to digitally facilitate, verify, or enforce the negotiations and transfer of value. These transactions are trackable and irreversible.

Thanks to this technology, it is impossible for a user to conceal any blemishes on their integrity. Why? Because the details of each previous transaction have been objectively recorded in the blockchain. Imagine the exterior of each train car displaying a stone ledger with the details of previous transactions (delays, successful deliveries, delayed payments, etc.) etched in by all parties involved when the transaction took place, for everyone to see.

This is just a metaphor, of course. The activities in mention are digitally engraved into the blockchain and unalterable without the approval of all parties involved in the transaction. This enables a whole new level of objectivity, transparency, efficiency, and trust.

Digitization and virtual consolidation on transactional data is the bridge that will allow supply chains to join the fourth industrial revolution, reaching levels of optimization and process automation that were previously impossible. Ultimately this means shorter times and lower costs to get products into the hands of end consumers.

dexFreight is building a blockchain based platform that will be owned by users, designed to foster effective collaboration with optimal levels of visibility and accountability for all parties involved. 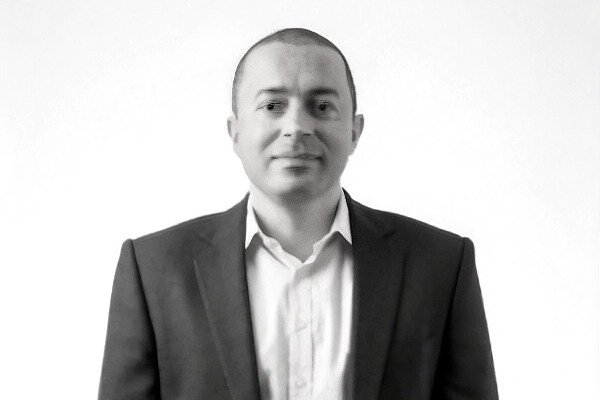 So much is happening at dexFreight!
We prepared a summary to keep you up to speed:

dexFreight, a decentralized blockchain-based logistics platform was chosen as one of the 2018 Freight.Tech100 companies. Nominations were sought, and a panel chosen by FreightWaves narrowed the list of more than 500 nominations to 100 companies. 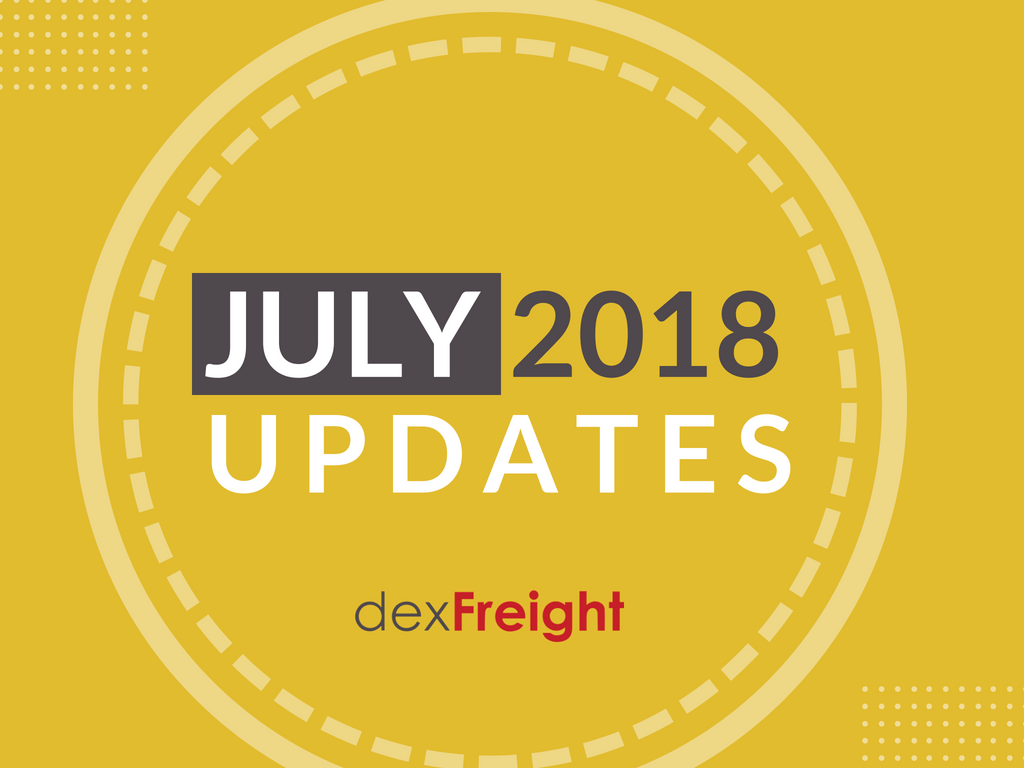 Are you curious about what’s going on with dexFreight? We thought about sharing with you the most important highlights for July!

Use Cases of Machine Learning in dexFreight’s  Logistics Platform

In this document, we describe in high-level use cases and strategies to implement machine learning algorithms. 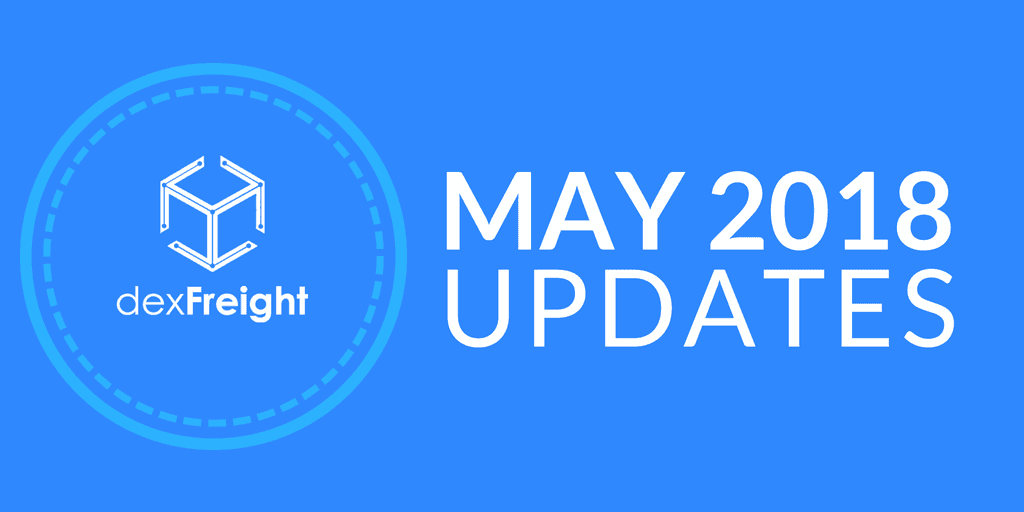 This month we revealed our decentralized logistics platform, experiencing an overwhelming response from the blockchain and logistics community. Every event we showcased dexFreight, we received nothing but validation.

dexFreight signs MOU with the FedEx Institute of Technology 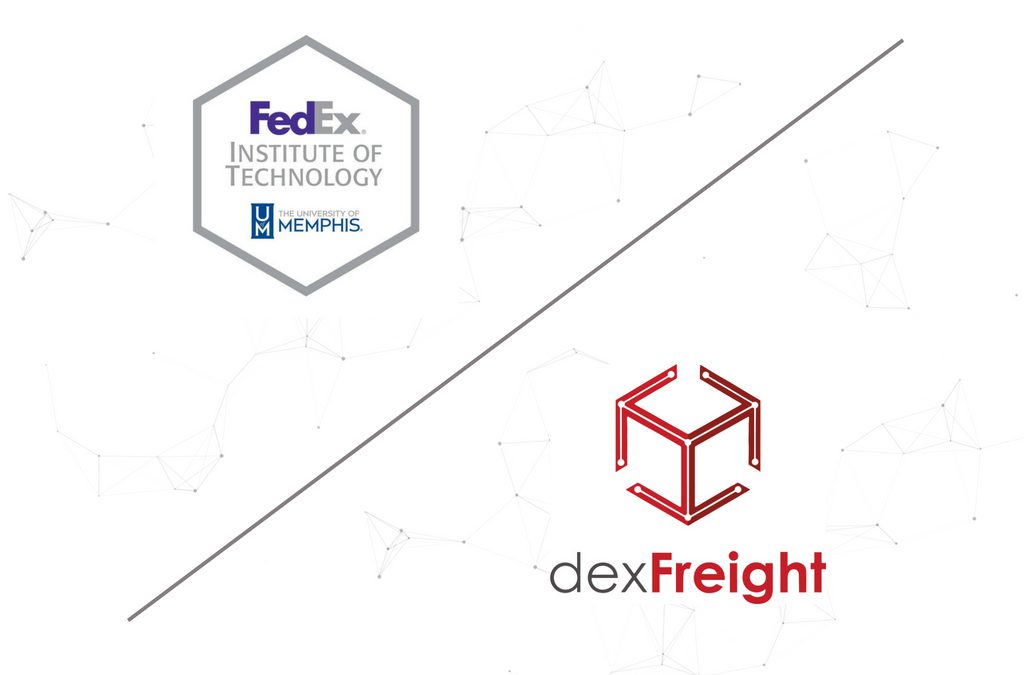 Two blockchain technology startups — one from Nova Scotia and one from Miami — have signed memorandums of understanding to establish operations in the University District.

dexFreight will attend Transparency18 as a proud member of BiTA 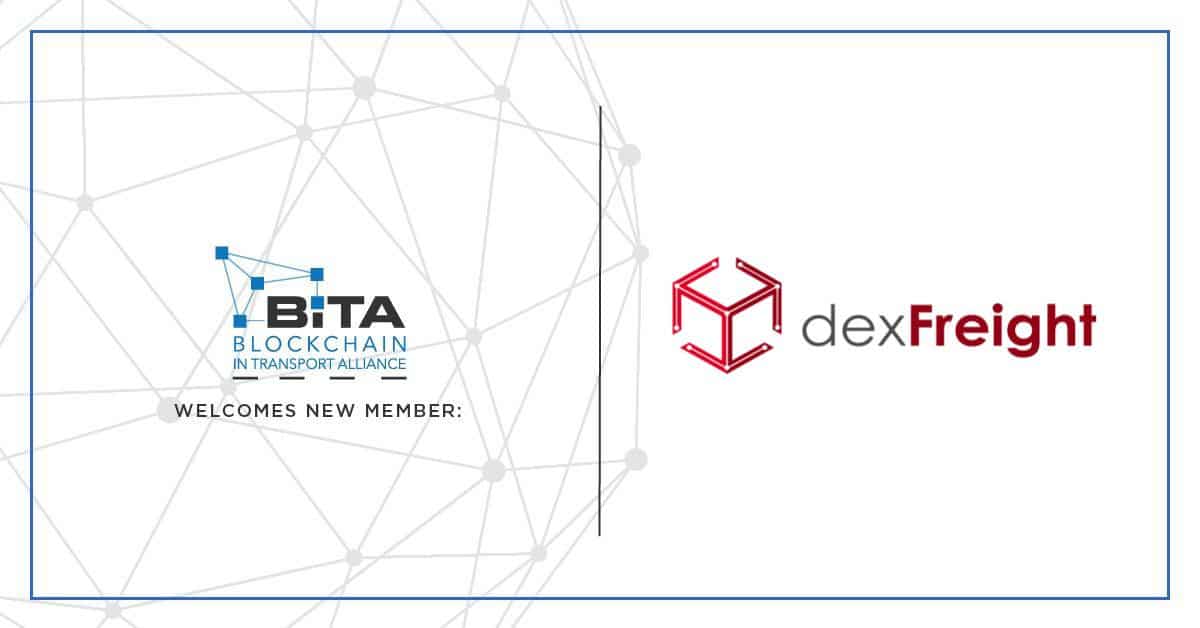 For the past 20 years, dexFreight’s co-founders have been firm believers in innovation. As freight brokers, freight forwarders, carriers, logistics staffing, and technology developers, the founders were convinced that technology held the key to resolving a lot of the challenges faced by the industry, but a piece of the puzzle always seemed to be missing. Until blockchain came along. 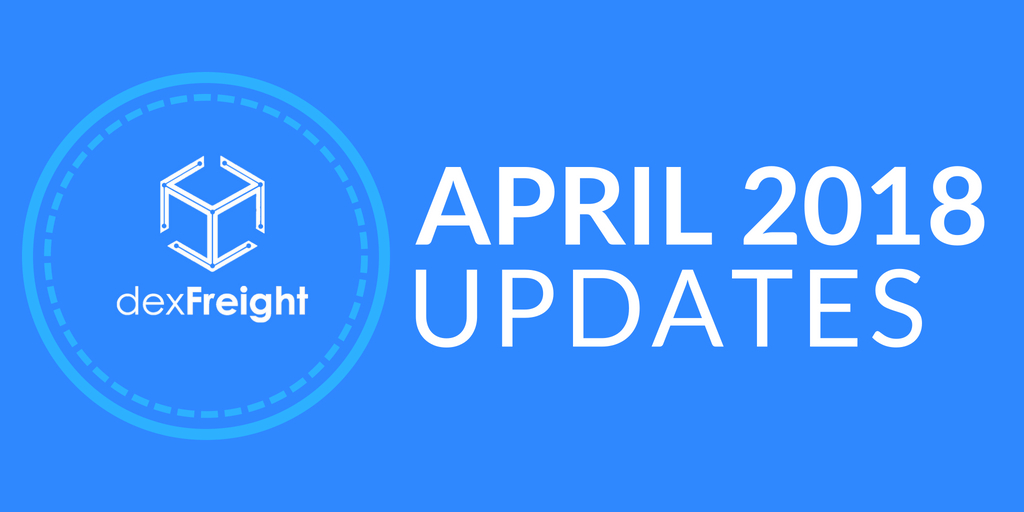 It’s been an awesome, but intense last few months. After months of hard work, dexFreight is rocking and rolling. Kudos to all hard work by co-founders and advisors. Thanks to their commitment, we’ve achieved many things in last few months. But challenges lie ahead. Startups like any other organization need an appropriate structure to overcome those challenges.

Why Are We Building dexFreight, A Decentralized Logistics Platform?

By Rajat Rajbhandari, PhD and Hector Hernandez on Apr 3, 2018 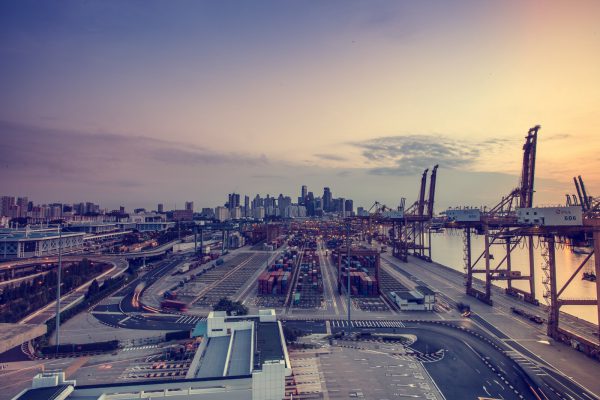 dexFreight’s co-founders have been in logistics industry for over 20 years as brokers, freight forwarders, carriers, and shippers. When we sat down late last year and brainstormed which problems blockchain technology (with the help of other technologies such as IoT and AI) can impact the most, we came up with following list of problems